Hello! Recently, on one project, I had to come across a VK bot that “lives” in group messages. Prior to that, I had the most diverse experience in creating bots from personal pages. In order for the bot to be able to respond normally to messages, one had to do all kinds of perversions with crowns, timers, “remembering” messages and other various horrors.
How surprised I was when I started smoking VK API groups with regards to messages, I saw this miracle - Callback API.

For impatient or loving to deal with everything on their own at the end there is a ready-made example.

The article is not intended for beginners at all, and I did not drastically delay it, especially omitting the chewing of very obvious things, otherwise it would be a very huge article. The subject of writing bots in general is not a very new topic.

For those who do not know what it is, I will tell you briefly.
With the help of this chip, VC itself automatically sends requests in the JSON format, where we specify ourselves.
About the JSON format, I wrote a little info in the article about creating authorization through VK

So, in this callback request, VK can notify about everything: new group messages, outgoing messages from the group, videos, audio, comments, new subscribers, and so on. And having read this request, we can decide how to respond to this request.
Just like payment systems. Magic.

Let's go in order. In order to use the callback api to create a bot or something else, you need:

First, of course, create a group.
Open the "Community Management" section, in which on the right there is such a menu: 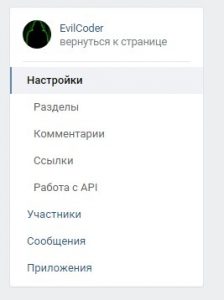 We choose to work with the API, where we have all the settings.

First of all, you need to create an API key, which is immediately desirable to be written somewhere, because to display it again, you will need to receive a text message on the phone.
Above is a tab with the Callback API.

Open it and see what is there. You can immediately specify “Incoming message” in the event types, we don’t touch the rest yet, otherwise they will unnecessarily strain the server, both VK and yours.

I propose to do this:
Let the bot respond to messages with the same message that was sent to him, only back to front, ahah

First, let's blind two files. callback.php and vk.class.php . The class is needed purely for convenience, so as not to pile up a large pile of code in one file. Let's do it carefully ?

Looking ahead, I’ll say that you can’t specify the localhosts, the VK server simply won’t see them, for tests or even a full-fledged bot, in any case, you will have to make some kind of poor server.

Before using the callback api itself, you also have to first confirm your callback script by returning the desired line to vk. All requests from the callback will fly in JSON format (already said), and VK, as it were, shows how they will look. The first of these is confirmation, which will look something like this:

Now we go to our callback.php , in which you first need to receive a request from VK and check what came there and immediately process it. The structure of the request sent from VK can be found in the official documentation of VK
Below is the full code of the callback.php file, which will be equipped with a ton of comments)
All the code will be simplified as much as possible, in many places on some large and serious project it’s better not to do this) You will need at least error handlers and so on, which VK can quite return to itself. It would also be desirable to use a secret key and all sorts of different